The islands Borkum, Juist, Norderney, Baltrum, Langeoog, Spiekeroog and Wangerooge are nestled between the North Sea and the East Frisian mainland. East Frisia is a region in northwest Germany and has about 465.000 inhabitants on 3144,26 square kilometers. East Frisia is characterized by the fact that it is not dominated by a large city. The structure of East Frisia is rather defined by the five medium-sized cities Emden, Aurich, Leer, Norden and Wittmund. Furthermore, there are five small-sized towns and numerous villages. East Frisia is considered to be the stronghold of the Low German language: approximately 50 percent of the inhabitants are still able to speak Low German. Over the centuries, the region was characterized by agriculture, fishing and maritime trade. Today, East Frisia is a popular holiday region. Especially the region “Krummhörn”, which is famous for its 18 romantic terp-villages and the fishermen’s village Greetsiel, is very popular amongst tourists, because it is located next to the East Frisian North Sea coast at the national park “Niedersächsisches Wattenmeer”. The “Krummhörn” is a community that includes 19 districts with about 13.000 inhabitants. With about 80 inhabitants per square kilometer, the population density of this region is very low.

Hinte is a calm community in immediate proximity to the seaside town Emden. The county town Aurich is about 20 kilometers away from Hinte. The four-star Hotel Novum in Hinte is about five kilometers away from the harbor town Emden. Numerous bikeways which invite you to extensive tours through East Frisia’s charming landscape are easily accessible from our hotel. The region’s connection to the road and rail network is fully developed. The Netherlands can be reached in less than an hour’s drive in order to visit the sights in many Dutch cities.

Visit the reconstructed mill in Hinte! The three-floor “Galerieholländer“ was fully renewed from 1994 to 1998. Today, it accommodates the tourist office, a tea room, a gallery and the wedding room of the community of Hinte.

„Hinta“, a castle set on a lake, was built at the end of the 13th century. During the 18th and 19th century, the castle was rebuilt and received its contemporary shape. It is located next to a church built in the 14th century.

Since then it is arranged as a four-winged construction with a big inner yard. The castle is surrounded by a ditch and accessible via a wooden bridge. Since the 16th century, “Hinta” is the private property of the von Frese family. The castle can only be visited from the outside, i.e. from the cemetery of the church. 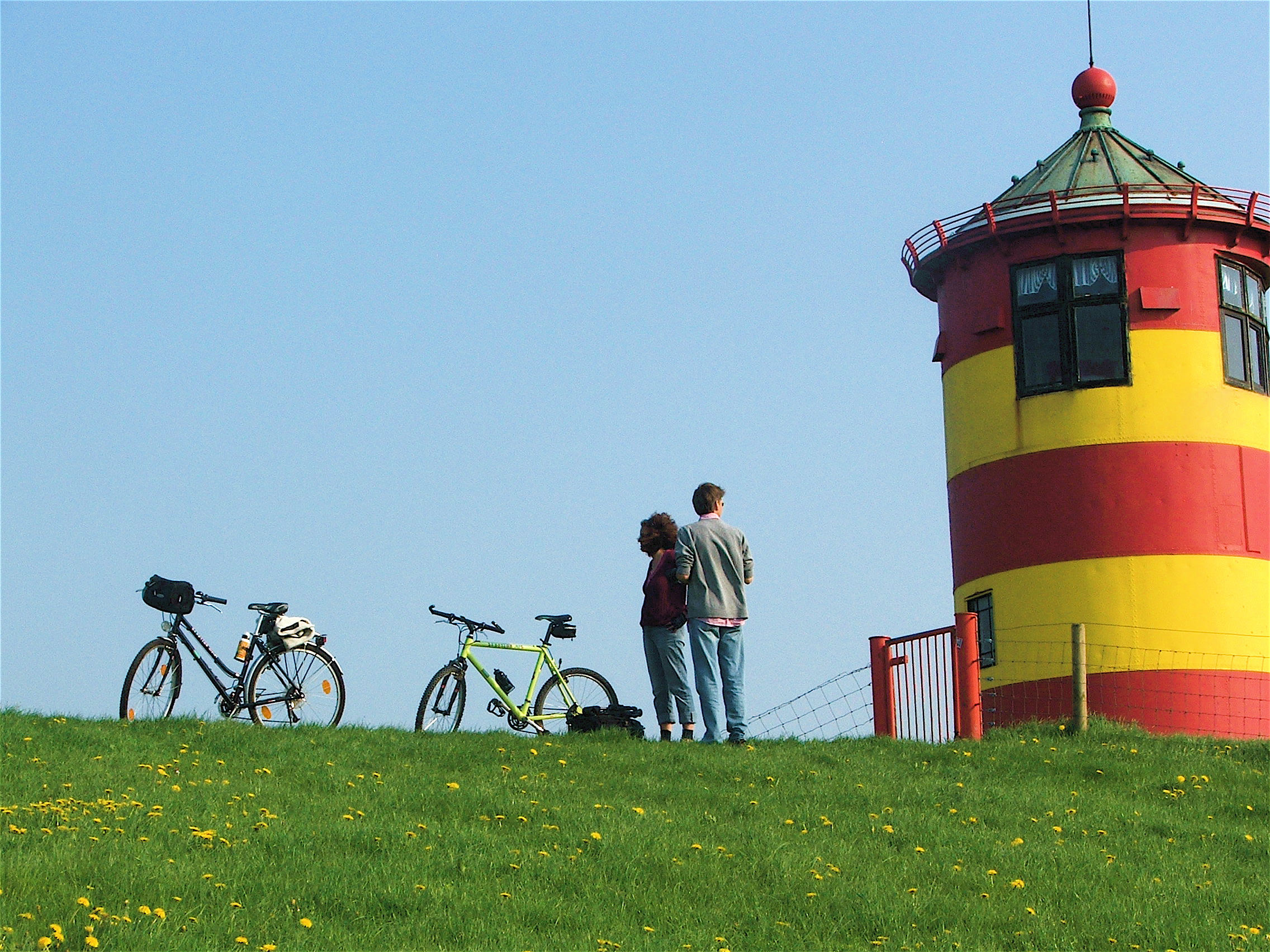 The lighthouse of Pilsum is one of the most famous landmarks of East Frisia. It located on a dyke in immediate proximity to the community “Krummhörn”. The lighthouse became famous because of a movie done by the famous German comedian Otto Waalkes. The lighthouse can be visited in the course of guided tours which inform about the history and the importance of dyke construction on the East Frisian North Sea coast. 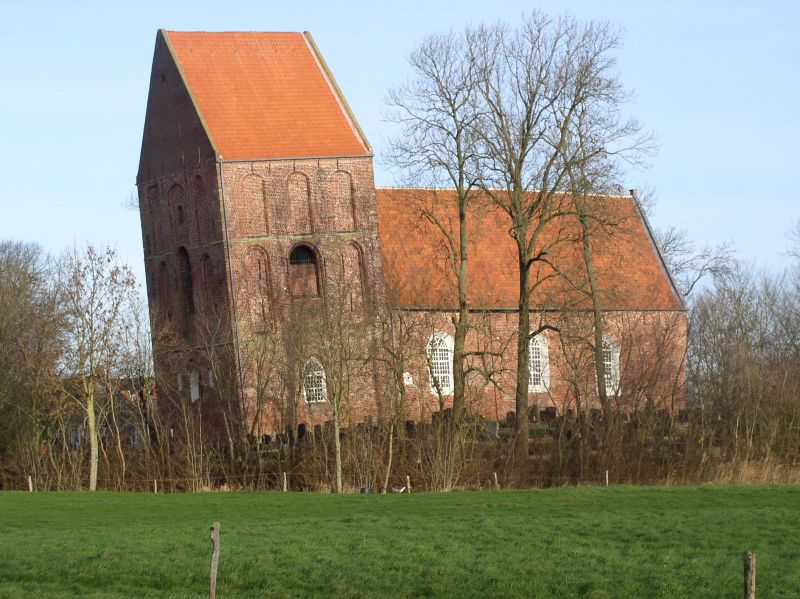 Krummhörn / Hinte
Since it is equipped with the world’s most crooked steeple, Suurhusen attained nationwide famousness because of its church. Moreover, a small museum called the “Landarbeiterhaus” is located in the center of Suurhusen. The “Landarbeiterhaus” shows an ancient working-class family’s life. Another famous sight is the organ in the church of Westerhusen.

The “Otto-Huus” shows the various important stages in the career of the famous German comedian Otto Waalkes, who was born in Emden. Otto Waalkes invites you visit his small museum and enjoy yourself by having a look at the many funny requisites exhibited there. Most certainly, his legendary “Ottifanten” are also part of the “Otto-Huus”.

The ruin of the medieval church “Große Kirche“ in Emden was modernly rebuilt and impresses with a special room in which people can experience art, culture, music and history. A permanent exhibition invites you to have a look at paintings, old manuscripts and modern graphic works. This program is complemented by varying exhibitions, concerts, lectures and readings.

Take a tour along Emden’s waterside promenade through the famous “Kesselschleuse”, Emden’s harbor and the “Delft” with its famous museum ships. Take a look at East Frisia’s typical vastness - far away from streets and settlements. The numerous curves remind of the fact that the channels flow within a former riverbed. Another must-do in Emden is a sightseeing tour in the harbor alongside the famous museum ships, the shipyards and the container-terminal. While being on a sightseeing tour in the harbor you will get an idea of the big wide world.

Henri Nannen, founder of the German magazine ”Stern”, built a house for his collection of 20th century art in his hometown Emden in 1986. His passion as a collector gave rise to a very special compilation of art. The Kunsthalle in Emden is a popular destination for art enthusiasts from all over Germany and the neighboring foreign countries. The German Expressionism and the art of the “New Objectivity” form the centerpiece of the collection. Part of the highlights of the Kunsthalle are works done by the “Brücke”-artists Kirchner, Heckel, Schmidt-Rottluff, Pechstein, Müller and Nolde. Furthermore, artists associated with “Der Blaue Reiter” (Jawiensky, Münter, Marc and Macke) and paintings by Beckmann, Feininger, Kokoschka, Rohlfs, Hofer, Radziwill and Modersohn-Becker are part of the collection.

Another part of the museum is dealing with contemporary art. Apart from a unique selection of Russian art from the “Glasnost”-period, works of Hödicke, Zimmer, Richter, Damisch, Altmeppen and Kantor are highlights of the collection.

Emden was nearly completely destroyed during an airstrike attack on the 6th of September 1944. Only the 35 bomb shelters survived the attack. After an inferno that lasted about 20 minutes, 78% of the city and the complete city center were destroyed. Despite numerous inhabitants having lost everything they had, the death toll was quite low with 370 victims. One of the remaining bomb shelters was arranged as museum in 1994 in order to remind of the tragic events that happened during World War 2.

The “Großes Meer” is just a couple of kilometers away from Hinte. It is a naturally emerged moor-lake with a water depth of about 0,5 meters to 1,0 meters and a total area of about 460 ha. A recreation and relaxation ground was built on the northeastern bank in immediate proximity to small channels and canals. The “Großes Meer” is a small paradise for vacationers: due to the low water depth, the “Großes Meer” is most suitable for water sports beginners. The area is mostly favored by surfers and sailors, but fishing and other water sports are also often practiced. The region around the “Großes Meer”, which is a natural preserve of about 2500 ha, can be used for cycling tours, Nordic walking, hiking or just for relaxation and refreshment. The continental climate with the winds of the North Sea leaves nothing to be desired. The southern part of the “Großes Meer” is an official natural reserve since 1974. 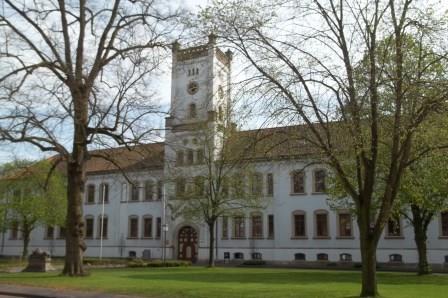 Aurich (Low German “Auerk”) is the second biggest city in East Frisia. Aurich has been the residence of numerous East Frisian rulers and the site of the Prussian and Hannoverian administration of East Frisia. This old tradition causes the self-confidence of Aurich’s inhabitants, who secretly speak of Aurich as East Frisia’s capital. Aurich is entitled to use bilingual place-name signs (German and Low German) since 2004. 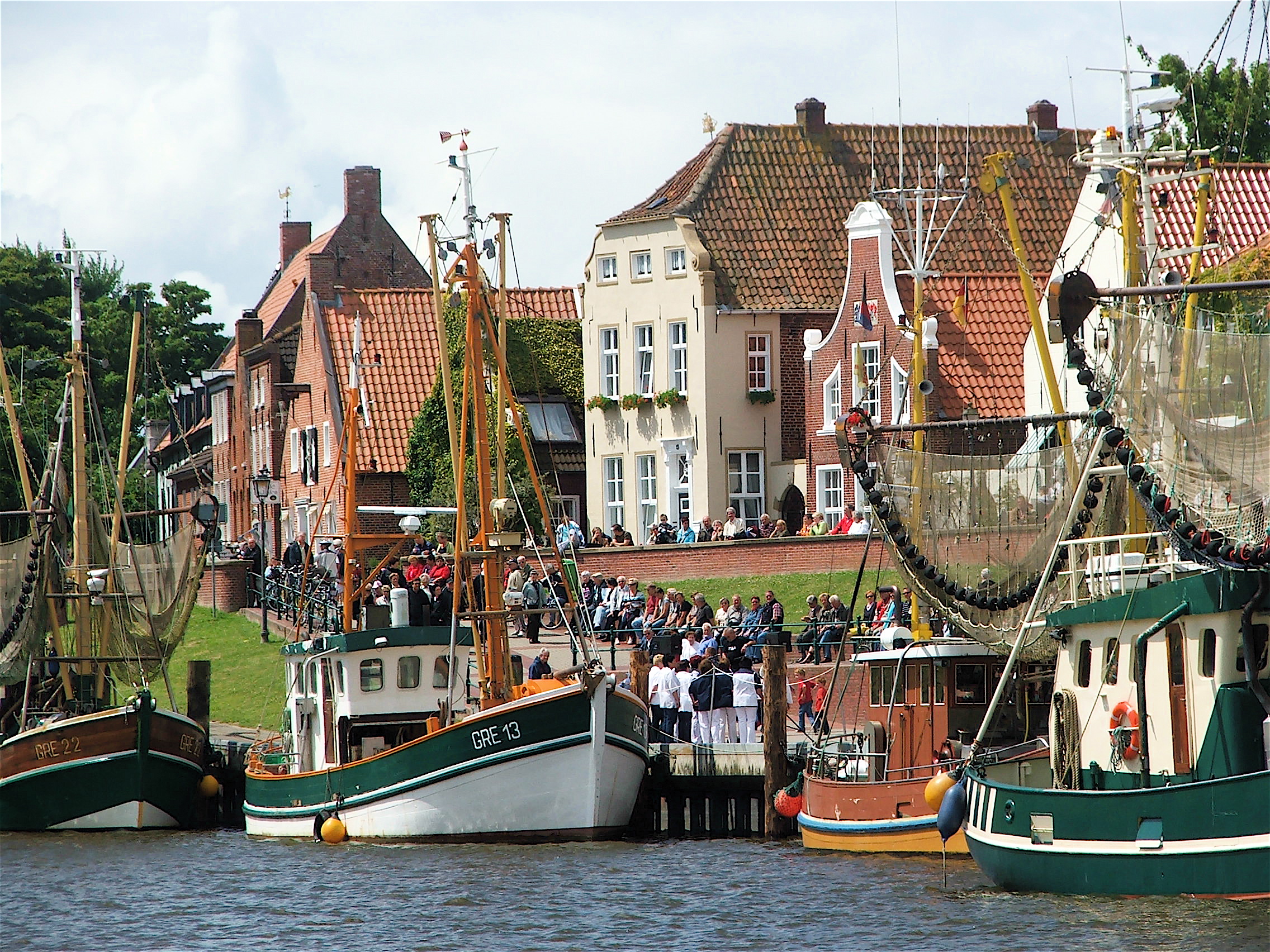 Without a doubt – Greetsiel is the most romantic fishermen’s village on the North Sea cost. Any visitor will feel like travelling back to ancient times when walking by the historic rows of houses. East Frisia’s biggest shrimp boat fleet (28 boats) starts out from Greetsiel in order to take a good catch in the North Sea. A tour to Greetsiel invites you to soak up the fresh sea air. Apart from the harbor and a stroll through the village, the twin mills, the 200 years old sewer gate, the ship in a bottle museum and the small galleries are the highlights of Greetsiel.

The world’s first dry beach was officially established in the terp-village Upleward in 2000. The beach was artificially arranged behind the dyke because of the tides. Nevertheless, it is still possible to go swimming since the North Sea is just at the very back of the dyke. The area around the dry beach is equipped with sanitary fittings, a kiosk, colored beach chairs, a beach volleyball court and an adventure playground with the sunken ship of Klaus Störtebecker. 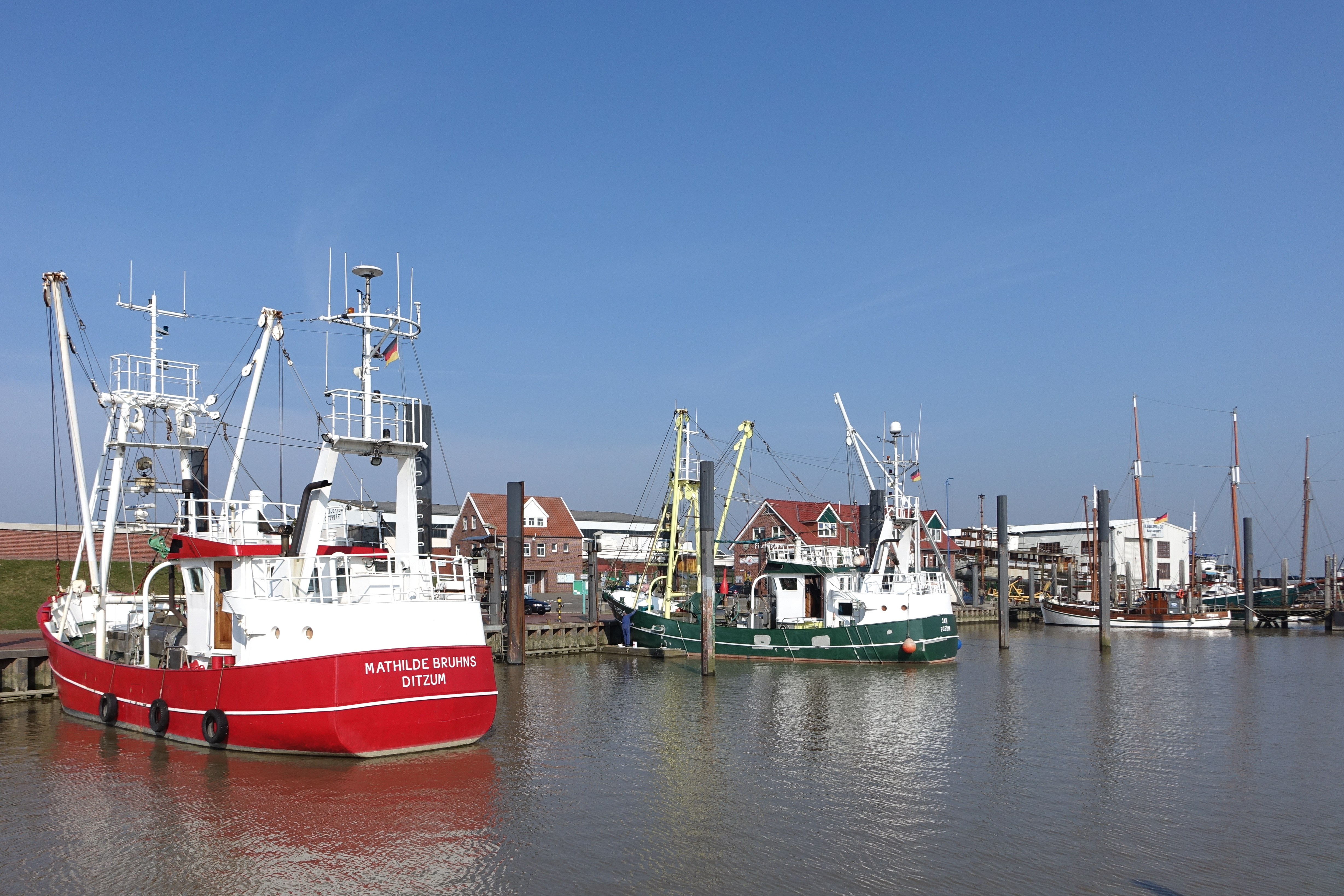 Ditzum is a small and romantic health resort in East Frisia. Since it is located between Emden and Leer at the opposite bank of the river Ems, Ditzum can be reached from Petkum via a ferry. Because of its charming harbor, the Karktilke (wooden bridge), the refurbished mill and the octagonal church, Ditzum is a beautiful village to relax and refresh. The Nature and Biodiversity Conservation Union Germany offers tours to the bird tower “Kiekkasste” in Neustaatensiel. Moreover, the Dollart, which is in immediate proximity to Ditzum, is an ideal area for surfing and sailing!

Since the local Bünting-group is one of East Frisia’s main tea producers, East Frisia’s third biggest city is well known among lovers of East Frisian tea. The picturesque old town is considered to be the most valuable of the whole region. Leer has four castles, numerous community centers and churches from different centuries. Because of its harbor, Leer has been characterized by trade for centuries. Moreover, Leer is considered to be one of Germany’s biggest locations for shipping companies. In addition, Leer pertains as East Frisia’s most important shopping city. Leer can be seen as a junction connected to the road and rail network. Because of its location, Leer is often referred to as the gate of East Frisia.

Norddeich is a harbor town and the gate to the East Frisian islands. Norddeich is always worth a visit – regardless of the time of the year. The adventure pool filled with water from the North Sea truly is something for everyone! The 105 meter long waterslide is a thrill ride for every child. Moreover, children can enjoy themselves under a waterfall or in the children’s pool. Adults can take a ride in the flow passage or in the witch’s cauldron. In addition, the adventure pool is equipped with a steam bath, a Finnish sauna, a soft-sauna, a solarium, a relax pool, a cold water facility, a grotto and an outdoor pool. Another highlight is the wave pool which runs half-hourly for eight minutes!

On the track of Otto Waalkes